Radon Mitigation is a Service

Radon mitigation is a service, a home improvement service, an indoor environmental service and most importantly service designed to reduce lung cancer risk. A radon mitigation system should provide you with the ongoing service of reducing radon gas levels. The key word is service. According to Merriam-Webster’s dictionary, service is: the occupation or function of serving or the employment as a servant. A servant is one that serves others. A commodity is defined as a mass-produced unspecialized product. In a world that revolves around the almighty dollar, sometimes radon mitigation companies confuse commodity with service.

Just this morning I met with one of those homeowners. They have a radon mitigation system installed in their recently purchased home. During the real estate transaction, it was negotiated into the contract that a system be installed due to radon test results showing elevated levels. The sellers selected a contractor to install the system and chose this company most likely because they were the lowest priced. Before they closed on the house, they had to provide proof that the radon levels had been reduced by the mitigation system. The post mitigation tests showed that the radon levels had been reduced to 2 pCi/L, which is below the EPA action level of 4 pCi/L. The buyers moved in and performed follow-up radon testing in various locations throughout the house to find radon levels were actually above the action level. In some locations it was three times the action level! Luckily they performed more radon tests in the house and didn’t rely on the original post-mitigation results or they may have lived with elevated radon for years on end with the false impression that the system was working.

They wondered how could this be? They called the original contractor who installed the radon mitigation system to ask them why the system isn’t doing its job. The contractor gave them a list of things they, the homeowners, could do to remedy the situation. This contractor didn’t even offer to fix his or her own system. The client did the few things the contractor suggested but still are living with elevated radon levels. They called us to see if we could help. I arrived at the property to see if I could find a solution to the problem only to find that the other company’s radon mitigation system was not installed correctly to begin with. Now this homeowner has to either pay to have the corrections made or, do what I suggested and vigorously pursue this contractor to have them fix the mistakes they made. This homeowner should not have to be in this position had the original contractor based their work on service rather than the commodity of the basic system components.

If you have radon mitigation system in your home, I have created a checklist to make sure that the system provides you the ongoing service of reducing radon in your home:

1.    Test your home for radon gas at lease once every two years. Do-it-yourself radon test kits are inexpensive and accurate, if used correctly. Short-term radon test kits show an accurate snapshot of the period of time the test was placed. Long-term radon test kits give the best overall picture of the radon measurements in the home. Many people have a radon system in their home and assume that it is keeping radon gas levels reduced, but that is not always the case. The only way to know if your system is doing its intended job is to test periodically.
2.    Check the cracks in your concrete. A good radon mitigation contractor will seal all accessible cracks in the concrete floor of the basement. This is an important step to block radon entry. Unsealed cracks can prevent the suction of the system from stretching across the entire foundation. If a radon mitigation system is installed and running, unsealed cracks can increase your heating and cooling costs because the system can pull this air from within the home and vent it out into the atmosphere. Unsealed cracks can also lead to back drafting of combustible appliances. Back drafting can potentially lead to carbon monoxide poisoning. If there are unsealed cracks, contact your radon mitigation contractor to return to the property and seal them like they should have when the system was originally installed.
3.    Check your radon system gauge. All properly installed radon mitigation systems should have a device that indicates system failure. In most cases, this is a manometer (vacuum pressure gauge.) The standard manometers have a series of numbers that indicate inches of water column, NOT RADON LEVELS. These devices let you know that the radon fan is on and running. Make it a point to check your system gauge at least once a week to be sure that there is not fan failure. On the system that I inspected this morning, the other contractor did not label this manometer. This is a dangerous mistake. A person who does not know what that device is for, may assume that 1” on the monometer indicates that they have a radon level of 1 pCi/L. A person can live with extremely elevated levels of radon and think the system is doing its job because the manometer is reading 1.
4.    Inspect the system components. The vent stack must be designed in a way to exhaust radon gas into the atmosphere and prevent it from re-entering the home. I have witnessed many radon mitigation systems, as I’ve driven through neighborhoods that have the vent stack exhausting right next to, or below a window. The exhaust must be at least ten feet away or two feet higher than any window, door or other opening. The Radon vent stack openings should be installed above the eave of the home and at least ten feet above the ground. This includes decks. Many times the vent stack follows all the above parameters but exhausts 8 feet above a deck. So these homeowners get hamburgers with a side of radon while enjoying a barbecue on their backyard deck.

If you do not have a radon system installed and are looking for a radon mitigation contractor, I have created a simple guide to help you find a radon professional who will provide you with the service that you deserve. Read my blog: A Quick Guide to Selecting a Radon Contractor 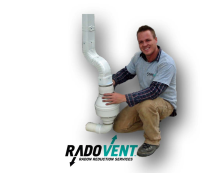